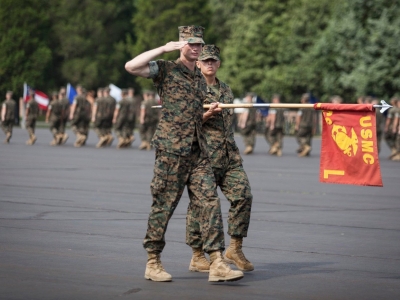 The NROTC Marine Option program at Duke prepares participants for a physically intensive, high-pressure career in the Marine Corps. Midshipmen who graduate from the program will have traveled a more demanding path than others, but they will be completely prepared for commissioning into the Marines as Second Lieutenants. Fewer in number, the Marine branch receives much more personal attention from the two Marines stationed here. Marine Options take a different series of courses and participate in their own set of Summer Cruises.

During the year, Marine Options participate in all Battalion activities in addition to some of their own. Since the physical qualifications for Marines are much more stringent, an additional physical training session is held each week. Similarly, since Marine careers in the Navy demand a different set of skills and other areas of knowledge, courses such as Amphibious Warfare, Marine Leadership, and Evolution of Warfare must be completed. Also, numerous Calculus, Physics, Computer Science and English requirements do not have to be completed by Marine Options.

Each summer Midshipmen are given the opportunity to spend a month or so getting a real taste of what military life is like. All Midshipmen and Marine-Options go to CORTRAMID their first summer, which provides an eclectic view of all the branches of the Navy. The summers after their sophomore and junior years, though, the Marine options split off to participate in their own activities. Their third and final summer, the Marines go to Officer Candidate School to prepare them for the arduous yet rewarding career ahead of them.