Throughout the year, the Battalion hosts various events and participates in special activities. As a Duke Midshipman, here are a few you can expect in the Fall and Spring semesters:

Naval ROTC Orientation is held prior to Duke University's freshman orientation at the beginning of every school year. Its purpose is to indoctrinate incoming Midshipmen with the basics of military professionalism, physical fitness, and how to succeed in the Naval ROTC program. It should be stressed that Orientation is not a military "boot camp", but an opportunity to transition incoming freshman to the NROTC lifestyle as well as ensure all administrative work and uniforms are taken care of. For most, this is the first taste of military life and they are forced to learn quickly; in only about a week's time, the Orientation Staff arranges for a variety of fulfilling activities for participants. Through a combination of classroom instruction, team building activities, and personal attention from upper-class Midshipmen, each freshman is challenged to achieve his or her potential. The newest Midshipmen are also introduced to drilling in formation, a mainstay of any Orientation experience. Orientation also provides a valuable leadership experience for upperclass Midshipmen, who fulfill roles varying from Squad Leader to Orientation Commanding Officer. 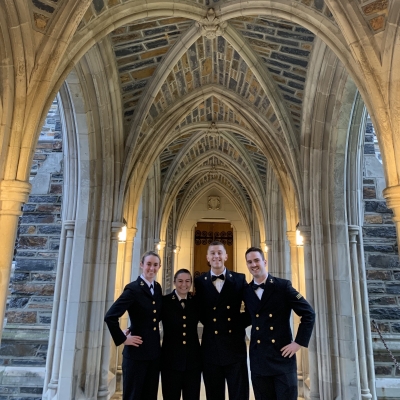 The United States Navy and the Marine Corps were founded on 13 October 1775, and 10 November 1775, respectively. Tradition holds that both services have a formal ball, where everyone gathers in their finest dress uniform for an enjoyable evening with their dates. The Fall Birthday Ball is held each year in November to commemorate the founding of the services. All three schools in the Piedmont Consortium - Duke University, the University of North Carolina at Chapel Hill, and North Carolina State University - come together to celebrate their naval heritage and commitment to the naval services. The Midshipmen participate in this type of event to learn social and military etiquette which is expected of all officers.

The Duke Naval ROTC Drill Team is a competitive group of Midshipmen who participate in an annual intra-consortium drill competition against NC State University and UNC-Chapel Hill. The Drill Team is usually composed of 4/C and 3/C Midshipmen. While on the team, members will learn unarmed drill and rifle manual, with a sword-bearing drill commander calling commands.

Comprised of the National Ensign, the Navy colors, the Marine Corps colors, and two rifle guards, Color Guard carries the duty and privilege of presenting our national colors during select basketball and football games, and miscellaneous events such as the Veterans Day ceremony. Color Guard is one of the most respectable and honorable ways for a Midshipman to represent the Battalion as well as the Navy and Marine Corps. The picture below shows the Color Guard presenting the colors during the National Anthem at a basketball game in a packed and noisy Cameron Indoor Stadium, where the crowd is so loud that it is nearly impossible to hear the Color Guard commander, even if you are standing directly next to him/her. Practices ensure that our Color Guard is as good as it can possibly be (with or without audible commands!) and ready to handle such intense and exciting atmospheres. Color Guard is open to Midshipmen of any class, including first years.

Dining In is held each spring and is a formal evening event for the senior class and the Active Duty Staff that is rooted in the history and traditions of the U.S. Navy. 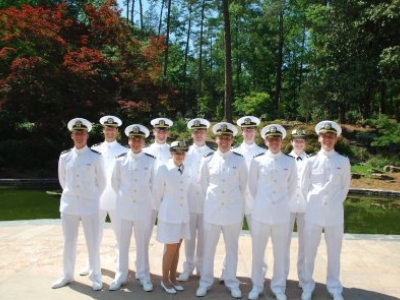 Commissioning is the culmination of each Midshipman's four years of hard work. It marks the end of their college careers, and starts them on their way as Ensigns in the United States Navy or as Second Lieutenants in the United States Marine Corps. The Battalion traditionally holds the commissioning ceremony inside the iconic Duke chapel. Ensigns and 2LTs perform their first salutes as officers on the Chapel steps.