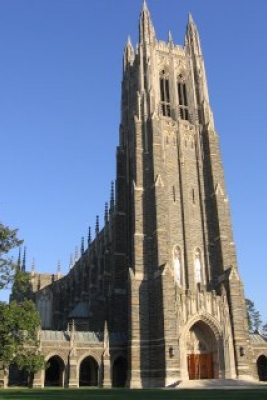 The Duke University Naval Reserve Officers Training Corps (NROTC) started on July 1, 1941, when the nation was on the verge of entering World War II. Originally located in what is now Card Gym under the command of CAPT A. T. Clay, the Duke NROTC unit was one of eight units that began in the early forties, with the national program itself dating back to 1926. Duke's unit started with a hundred students and has since produced over a thousand officers, including eight admirals and generals.

Throughout its existence, the Duke NROTC unit has enjoyed a strong relationship with the university's administration. When student protests during the Vietnam War demanded that the unit be disbanded, the administration decided that it was in the best interest of the university that NROTC continue. One person who made notable contributions to the relationship that the Navy has with Duke University was Pelham Wilder, a World War II veteran and chemistry professor who championed NROTC issues for over thirty years. He was Duke's representative to the Association of NROTC Colleges and Universities for more than 25 years; he was the president of the association from 1982-1988.

The original mission of the Duke NROTC unit was to provide college Midshipmen with courses in basic naval subjects; to develop an interest in the naval service through an understanding of naval customs, traditions, and practices; to develop a capacity for leadership through precedent and example; and to introduce midshipmen to the naval way of life through practical experience.

Officers instructed these first Midshipmen through Leadership Reaction Courses, labs, and classroom instruction, which included topics such as simple as tying varieties of knots and complex as Global Naval Operations. Midshipmen also excelled in rifle and drill competitions against other NROTC units. They were consistently praised by the university for maintaining a balance among military requirements, academic studies, and social life, which included significant involvement in varsity sports and fraternities.

Today, the Duke NROTC continues that strong tradition started in 1941. Duke NROTC carries out the mission to develop young men and women morally, mentally, and physically, and to instill in them the highest ideals of honor, courage, and commitment while educating and training them for leadership positions in an increasingly technical Navy and Marine Corps.