Visiting Duke? Come visit our NROTC program! Or, ready to schedule your Officer Interview? Click here to schedule a meeting. 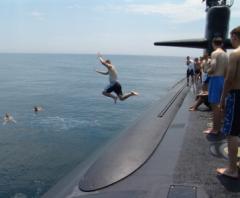 3/C Midshipmen participate in CORTRAMID (Career Orientation and Training, Midshipmen). CORTRAMID allows Midshipmen to see a broad range of the opportunities which are possible for them as Naval or Marine Corps Officers. It is held at two different times, once on the east coast in Norfolk, VA and once on the west coast in San Diego, CA. CORTRAMID lasts four weeks, with each of the four weeks devoted to a different warfare specialty.

During Aviation week, Midshipmen receive survival training and briefings on flight physiology and possible aviation career paths. All Midshipmen also receive at least one flight in a T-34 training aircraft, helicopter, or, for a lucky few, a ride in a jet fighter.

Surface week places Midshipmen aboard either a Cruiser, a Destroyer, or an Amphib for a week. Midshipmen have an opportunity to see what shipboard life is like and are allowed to participate in a number of activities on the ship.

Marine week allows Midshipmen to get some motivating time in the fresh air and sun as they get to see life from the Marine point of view. Midshipmen are treated to Marine PT, taught basic fire team tactics, and culminate their week with a night out in the field followed by mock battles and ambushes.