Visiting Duke? Come visit our NROTC program! Or, ready to schedule your Officer Interview? Click here to schedule a meeting.

Being A Duke Mid 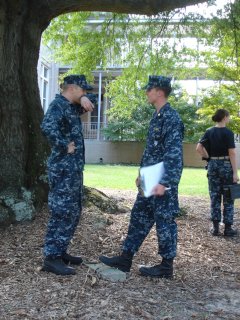 The ROTC experience is unique in that Midshipmen are able to enjoy the college lifestyle while preparing for a career in the United States Navy or Marine Corps. Duke Midshipmen are a diverse group of individuals who engage in a wide variety of campus clubs and activities. Many Midshipmen are active in the Greek system as members and leaders of fraternities and sororities. Midshipmen in the Battalion compete in sports on the varsity and club levels and play together on intramural sports teams, including basketball and dodge ball. Engineering and Math groups, musical performance groups and community service organizations are also popular among the Midshipmen. Tenting in Krzyzewskiville (more commonly known as K-ville) for men's basketball games before heading inside to march in as part of the Color Guard is just one example of how Midshipmen participate fully in both military culture and Duke culture.

Duke Midshipmen also take advantage of the academic opportunities available through the University. Many Midshipmen have studied abroad and traveled as far as Spain, Australia, China and Turkey. Nearly every major is represented among the members of the Battalion, including Engineering, Psychology, Math, Political Science, Biology, History and Economics. The diversity of involvement among Duke Midshipmen is not only an asset to the student community, but to fellow Midshipmen as well. It is good to know that no matter what the circumstances may be, you always have the wealth of experience from your peers to draw upon.